What's on my mind 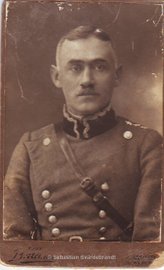 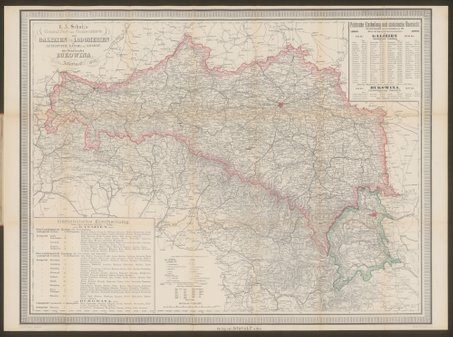 Map of Galicja and Bukowina from year 1900.

He was raised in his family home in Dobronowce (German: Dobronoutz, Ukrainian: Dobrynivtsi) in Bukowina, then part of Austro-Hungry (today Ukraine). Located about 10 kilometers from the river Dniester and the border with the Russian Empire. The landscape was hilly, covered in large parts by forests. 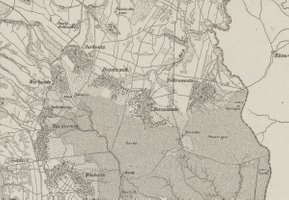 Until the 19th century it has been a scarcely populated and poorly developed part of Europe. Until not long ago this region has been ravaged by wars between Christians and the Ottoman Empire. Now with the stability of the Astro-Hungarian Empire ruling the region the population started to increase. Stability and the raise of industrialization in Europe and in particular development of communications – read trains – groups of new commers started to settle in the region.

In the late 19th century, Bukowina had a very cosmopolitan population. Ruthenians, Poles, Germans, Jews, Romanians, Hungarians and other ethnic groups were mixed in this cosmopolitan pot that was the Astro-Hungarian Empire. A mix of religions, not always following the ethnic divisions, made it even more diverse.

Dobronowce was as the rest of Bukowina. With a population of more than 1600 it had become a small town. It was with sorrow I visited Dobronowce in 2019. After the ethnic cleansing of the 2nd World War and Soviet rule it is now ethnically homogeneous. But also, poorer than it was 100 years ago – from all perspectives. The feeling of time that has stopped a century ago was very present wherever I turned.

Adolf Władysław Drwota, aka Dolek, was born on January 26, 1880, in the village of Chobot close to Kraków in Galicja – then part of Austro-Hungry, today located in the south-central part of Poland. Son of Ferdinand born in 1849, in Ottensheim, Upper Austria and Bronisława Maria of Wimmer born in 1856, in Niepołomice, Galicja.

He had at least seven siblings, including five brothers; Jan, Antoni, Stanisław, Franciszek Ksawery and Władysław, and sisters Eugenia and Emilia. 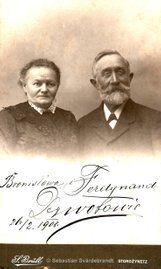 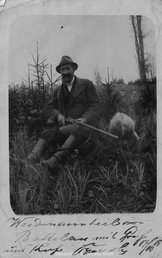 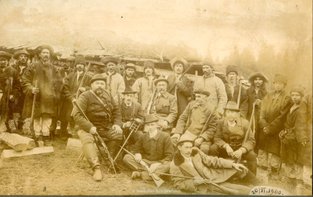 Ferdinand Drwota in the middle.

Adolf studied between 1891 to 1892 at Ober-Realschule in nearby Czerniowce (Tschernowitz in German) today Czernowitz in Ukraine. Then capitol of Bukowina. I visitid Czernowitz in summer 2019. School is still standing and used as a school.

Adolf with brothers and their wifes.

Bronisława and Ferdinand with sons outside their house in Komarestie.

His position and influence clearly enabled him to secure that Adolf, as well as his siblings, received a good education. All sons also became successful military officers. Along with his siblings, Adolf married into influential families, elevating their status.

Over time parents, children and their grandchildren kept close contact. There are a lot of letters and pictures from the early 20th century showing how close they were.

Ferdinand together with his wife spent his late years in Komarestie close to Czerniowce. In 1918 region of Czerniowce become part of Romania. He worked as Forest Manager, following tradition of his father, until he died on September 1st 1928. Bronisława, his wife, died on January 17th 1935 in Prisaca Dornei, Suceava in Romania.

Adolf received his higher education at the University of Vienna as an agronomist and hipologist. His military education is unclear.

From 1902 to 1903 he served in the military as a one-year volunteer, in C. and K. 13 Infantry Regiment, which was then stationed in Kraków and Bochnia.

He was promoted to lieutenant in the Infantry Reserve on 1 January 1904. At the time, he was a reserve officer of the C. and K. 13th Infantry Regiment. He was called up for active duty as a lieutenant (German: Leutnant) with seniority on 1st of November 1905.

In 1911 he was retired from active duty. From 1911 to 1914, as a reserve officer, he served as a storage officer (German: Magazinsoffizier) in C. and K. 1 of the Galician Ulan Regiment in Lwów (today Lviv in western Ukraine). On May 1, 1912, he was promoted to senior lieutenant.

Adolf and Stefania Drwota with their first son, Eugeniusz.

Adolf and Stefania Drwota after the wedding – 1912 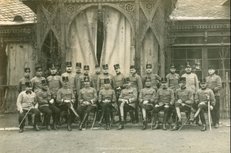 Officers of C. and K. 1 of the Galician Ulan Regiment in Lwów. Adolf Drwota on the right in the first row.

Stefania was born on the July 19th 1888 in Libusza near Gorlice in Galicja, today located in southern Poland.  She was dotter to Mieczysław Mrazek and Felicja Karolina Fedorowicz. Raised in the privileged family as 2nd oldest of eight siblings.

Her father was owner of Sękowa estate, several oil fields as well as oil, gas and coal prospecting and drilling companies.

Adolf has courted Stefania for at least 2 years before their wedding. Several postcards and letters have survived from that period. Showing Adolf’s affection towards Stefania.

Nine moth after the wedding, on the December 25th 1912, their first son Eugeniusz Mieczysław was born in Kraków. 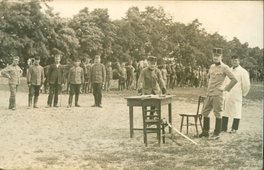 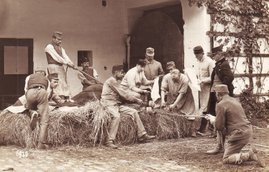 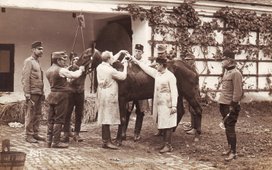 Great War or World War I started on the 28th of July 1914. After announcement of the mobilization in August 1914, as a hipologist, Adolf became part of the reception of horses and was transferred to the 8th regiment. 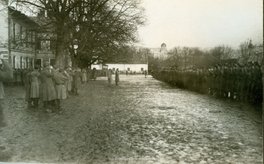 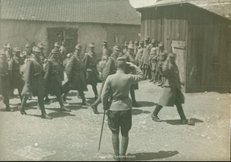 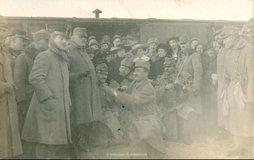 Troops leaving for the front.

Adolf was wounded at the Italian front. He recuperated at the hospital behind the front. His younger brother Franciszek was severely wounded at the front and stayed at a hospital where Adolf visited him. During the Great War Adolf served on both Italian and Russian fronts.

In 1917 he was assigned to 41st Infantry Regiment in Lwów.

Adolf Drwota visiting his brother Franciszek at the hospital. 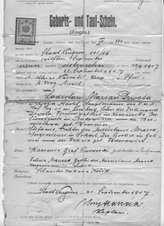 The Great War officially ended on the 11th of November 1918. Adolf was admitted to the Polish Army on November 28, 1918. The newly reborn army consisted of army units from both Austro-Hungry, Germany and Russia. He was assigned to the Field Gendarmerie.

Post war Poland was, as most countries in central Europe, in chaos. Country has just been reborn after more than 100 years of occupation. There ware no civilian authorities, no police. Military police (gendarmerie) was ordered to fill this vacuum.

On January 28, 1919, Adolf took command of the Dowództwo Żandarmerji przy Okręgu Generalnym Łódzkim (Gendarmerie of the General District "Łódź") in Łódź. His office was on Cegielniana 19. He had an apartment at Piotrkowska 40 with phone number 325.

He was formally admitted to the Polish Army from the former Austro-Hungarian Army with rank of rotmistrz ze starszeństwem (English: cavalry captain with seniority; German: Rittmeister) on September 25, 1919. 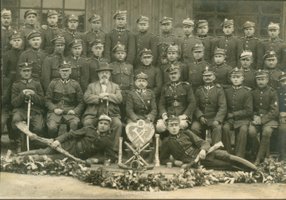 Stefania and Adolf with sons moved to Kraków. They owned a property at ulica Sienkiewicza 12. In January 1931 they purchased, with equal ownership, a house at ulica Na Zbóju 7 (today ulica Tatrzańska 7) in Podgórze. They moved in later that year.

Place of the street Na Zbóju has an interesting history. The name “Na Zbóju” translates into English as “on bandit”. It was previously an execution location. One of most known people executed there was Aleksander Kostka-Napierski, leader of the peasant uprising in Podhale in 1651 and illegitimate child of King Władysława IV. 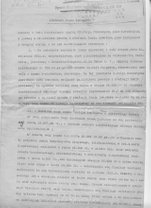 Act of purchase for the house at ulica Na Zbóju 7 in Podgórze.

Adolf Drwota after stay at the hospital.

Stefania gave birth to the 2nd son on the September 12th 1917. Władysław Marian Drwota was born in Olomouc in Moravia, today part of Czechia. He was baptized on the 20th of the same month. Godparent ware Kazimir Graf Russocki and Felicia Mrazek, Stefania’s younger sister. 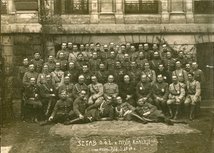 Officers of General Military Command of District "Łódź” with some Allied officers in the back. Adolf Drwota in front in the middle.

On October 1, 1919, he became the commander of a military stallion breeding estate in Mniszek.

In December 1923, he was assigned to the Szefostwa Remontu Dowództwa Okręgu Korpusu Nr X (Head of The Renovation of The District Command of Corps No. 10) in Przemyśl as a spokesperson, remaining a full-time officer of the 10th Rolling Stock Squadron.

On July 1, 1924, he was advanced as professional officer in the rank of major with seniority on July 1, 1919 and 2nd rank in the corps of rolling stock officers.

In May 1925, he was assigned to the Komenda Uzupełnień Koni Nr 25 (Horse Replenishment Command No. 25) in Brześć nad Bugiem as Commander.

In 1920th and 1930th value of polish currency as well as many others were extremely unstable. During periods, inflation made it almost impossible to know the value of money. A typical solution was using gold or US dollars as currency or exchange rate when you signed contracts for any significant amount.

When buying the house at “Na Zbóju”, which was a significant property including five rent apartments, Drwotas signed contract with value of 69 250 złoty. But payment itself was partially in gold (24 000 złoty) and rest with bound exchange rate to US dollar.

In 1932, Polish government sent Adolf to Załośce as government commissioner.

Załośce (Załoźce, Zaliztsi), is a small town in todays western Ukraine. In 1930th it was part of Poland. Three times larger than today, town had a mixed population of Poles, Jews, Ukrainians and more. History had not been kind to the town. A large and thriving town from 16th to 19th century, it had a castle, school, hospital, churches and synagogues.

During the Great War, town was the place of heavy battles between Astro-Hungarian and Russian armies. Much of the town and castle ware devastated. Still in the 1930th town was poor.

What Adolf most likely did not know was that his wife’s ancestors, just two generations back, were living in Załośce. And some of their descendants were still living there.

Adolf, in his position, initiated work in order to build new school in Załośce. Initial activities before than ware not successful as local county (gmina) lacked funds and had a lot of dets.  He was chosen as chairman a comity for building of a new school. He worked with organizing funds and any generally seeking help where it could be found. School was built. And it still stands today. I visited the town in 2019. As rest of the region, it is scarcely populated and poor. Polish roots are still visible but devastated and in ruins.

Ruins of catholic parish church with school in the background.  Załośce in 2019.

In 1934, he remained in the records of the District Replenishment Command Kraków City. He was assigned to The District Officer's Staff No. V. He was then "intended for use during the war".

He died on 1st of January 1936 at his mountain cottage. He was staying there with his adjutant. Day before he sent him home and stayed alone. He died of heart attack. He would perhaps survive but he was alone in bad weather in mountains. Note, some sources incorrectly are stating that he died at the nearby Military Sanatorium in Kościelisko. He was most likely brought there after he was discovered dead.

Adolf Drwota was buried at Nowy Cmentarz Podgórski in Kraków. He rests together with his wife Stefania and his oldest son Eugeniusz at Kwatera: PAS 2 Rząd: zach Miejsce: 9. 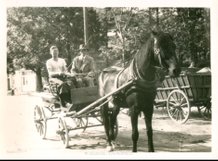 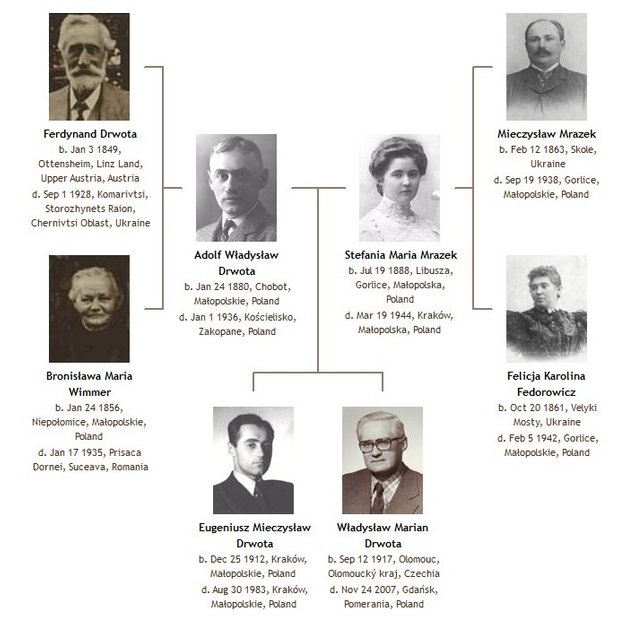